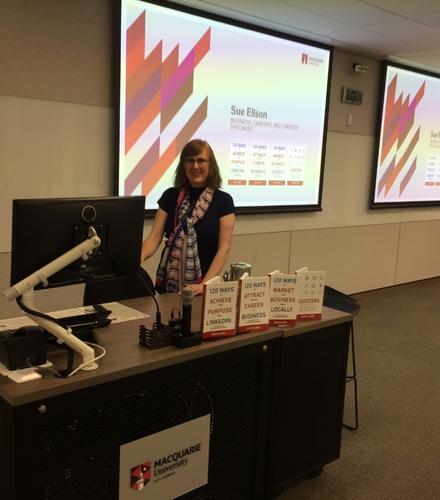 For education and action

I have prepared bespoke presentations for a range of audiences including schools, universities, vocational training providers, enterprises, professional associations, government, not-for-profits, clubs, the public and more.

You are invited to contact me directly if you would like me to provide a presentation for you.

I have prepared prepared presentations for a wide range of topics aligned with my consulting services, including but not limited to:

The following is a list of the public guest speaking and training presentations I have been booked for, made, facilitated or been interviewed for during 2001 (it does not include details of all of the private sessions run for individual clients or enterprises).

Some of these presentations have PowerPoint Slides, Word Documents and/or Audio and/or Video Files available or they may be supplied on request. I tailor every presentation for the individual audience and I update the course material before every session.

Voluntary* presentations are indicated with a star *. Courses run multiple times have a number after them for the number of times that the course has run.

15/10/2001
Tapping into the visiting friends and relatives market
Maroondah Tourism Advisory Board Maroondah City Council Offices, Ringwood, Victoria Invited to make a presentation to the Maroondah Tourism Advisory Board at Maroondah City Council Offices, Ringwood to discuss ways that local tourism operators could capture newcomers to the municipality. Whilst this region does not attract a large number of new interstate or international arrivals, it does attract a lot of first home buyers who still need to feel part of a new community having moved from their previous location

04/10/2001
Time management – a strategic approach
Micro Business Network Conference Boroondara Council Offices, Camberwell, Victoria  Invited to make a five minute presentation on a solution to a common issue faced by micro businesses at the ‘Just another day at the office’ Micro Business Network conference at the City of Boroondara Council Offices, Camberwell. She chose to discuss time management and four useful strategies she has employed – relaxing, listening, learning and evaluating. A light hearted and friendly presentation to approximately 90 business owners

07/08/2001
Making it Back in Melbourne
Sue Ellson was one of the guest speakers at this Newcomers Network event held at the Victorian Arts Centre in Melbourne and she spoke about the future development of the enterprise and the topic of repatriation.  Michael Veitch, well known writer, actor, comedian, and radio personality was the Master of Ceremonies and Professor Michael Clyne AM from the University of Melbourne, Department of Linguistics and Applied Linguistics and Sue Nattrass FAIM, Executive Director of Millmaine Entertainment and Artistic Director for the 1998 and 1999 Melbourne International Festival of the Arts and Mei Ling Ooi, a successful model and businesswoman previously from Malaysia were the speakers

22/05/2001
Making it in Melbourne
Sue was one of the guest speakers at the launch of Newcomers Network held at the Victorian Arts Centre in Melbourne and spoke about the new Newcomers Network enterprise and how it will move forward. Jo Pearson, former television news reader and Managing Director of Media Strategies was the Master of Ceremonies, Karen Halfpenny, General Manager of Human Resources from Telstra Corporation and Kevin Sheedy AM, Australian Football League Premiership Coach of Essendon Football Club and Dean Rioli, player for Essendon Football Club were the speakers

20/02/2001
Moving to Melbourne Research Findings
Peter Clarke’s evening program on ABC Radio 774AM ABC Radio Studio, Southbank, Victoria After a direct approach to the producer of Peter Clarke’s evening program on ABC Radio 774AM, Sue recommended both Nicci Baker from Making the Most of Moving and Brian Crawford from Toll Transitions to join her on the statewide radio program for a discussion on the issues of settling in to a new location. After a brief summary of Sue’s research findings, callers were invited to ring in and discuss their personal relocation experiences over a 50 minute program that commenced just before 8-00pm. A revealing and insightful program stimulated many phone calls from interested listeners